Hi Gordon and Joan!
Here we go again!!! Kenny and Vera Swade, and Jim and Lynn Boyle over there in Citrus Hills were all high level, super intelligent people that have forgotten more than I ever knew,..... then we had Rod Jaeger over in Sugar Mill who was in charge of construction in the Marines, and now I get Gordon Converse!

Yep, you probably guessed it! Gordon is a retired "GENERAL CONTRACTOR"!
You know, he built houses, strip malls, hotels, ETC.!
I'm thinking OH GREAT!
This guy has eaten little twerp companies like us for lunch many times in his career!

I'm tellin you folks,....it's always a little intimidating to work for a proven successful person in the construction business because you KNOW, that they KNOW, how it should all REALLY go!
Not that we EVER shortcut anyone anyway, but it just scares the BeJeebies out of you because you don't want to mess anything up!

I figure if we get the Thumbs Up from Gordon on his job, then we've really accomplished something coming from a true PRO in our industry!

On the flip side, Joan has done really good job with Gordon over the last 50 plus years! She's a real sweetheart of a gal, and you'd have to be to live with Gordon that long!

You see, Gordon has a pretty good sense humor actually!
VERY quick witted!!
Someone asked him if he ever thought about divorce in 50 years of marriage, and he says, NO, but I thought about murder a few times!

I think Joan wanted to give him one these,..

..., but there were too many people present at the time! She told me she CRIED for the entire first year after they were married!

I don't blame you Joan!

Maybe you'll get him straightened out one of these days soon!
EHHH, probably not!

Hang in there Joan, and keep that great smile coming!
I guess I better shut up now since Gordon hasn't written the final check on the job yet! 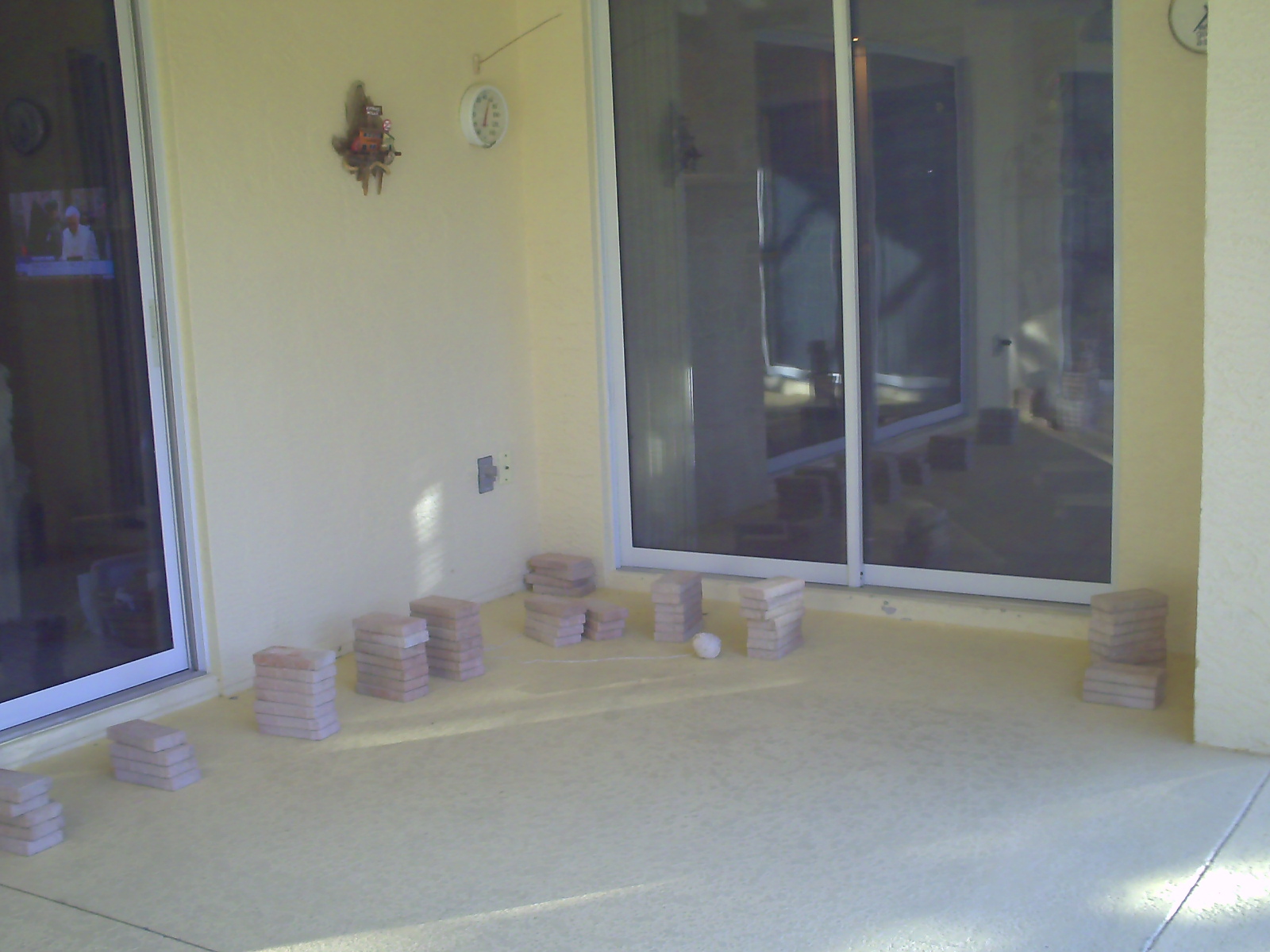 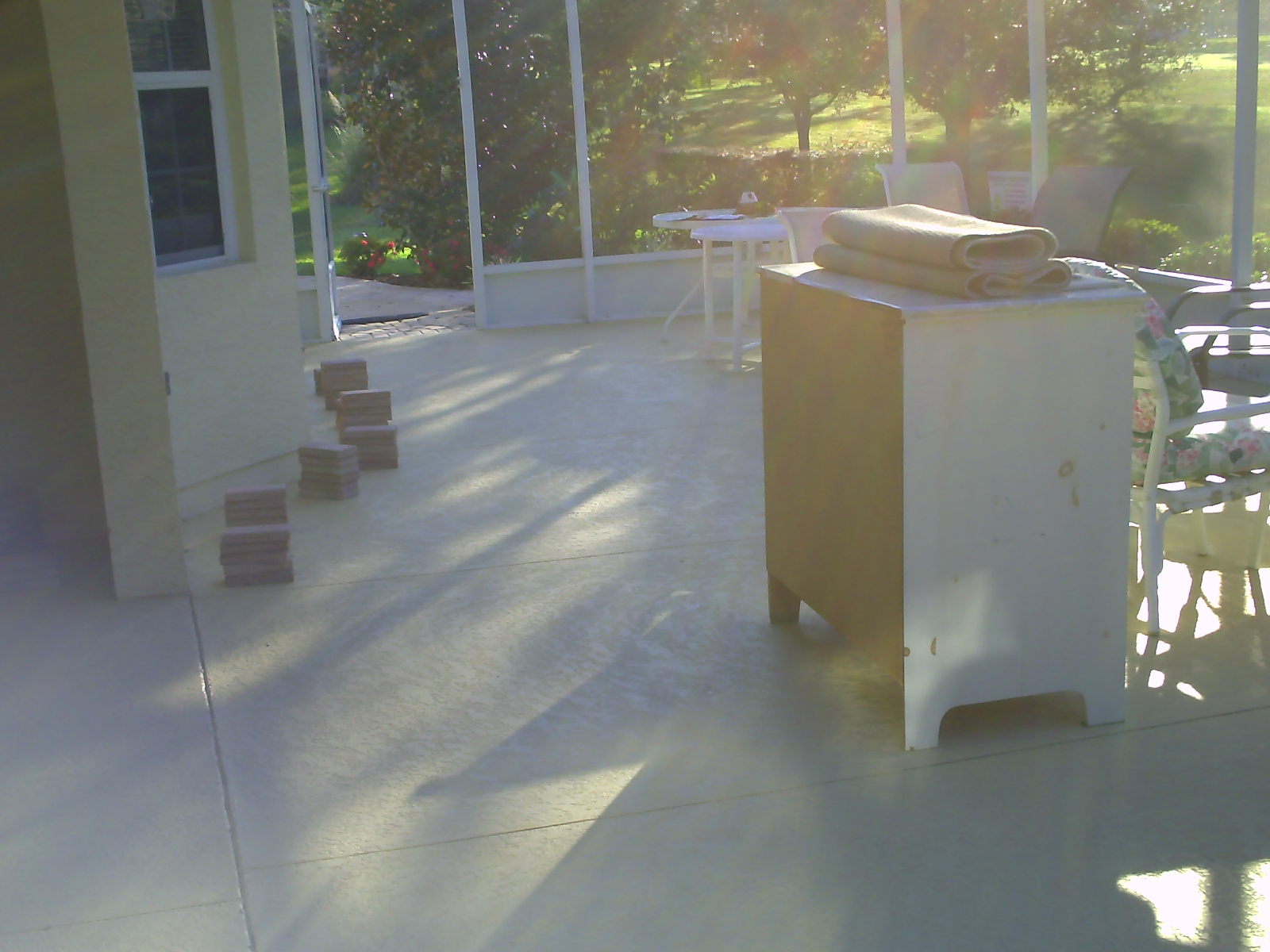 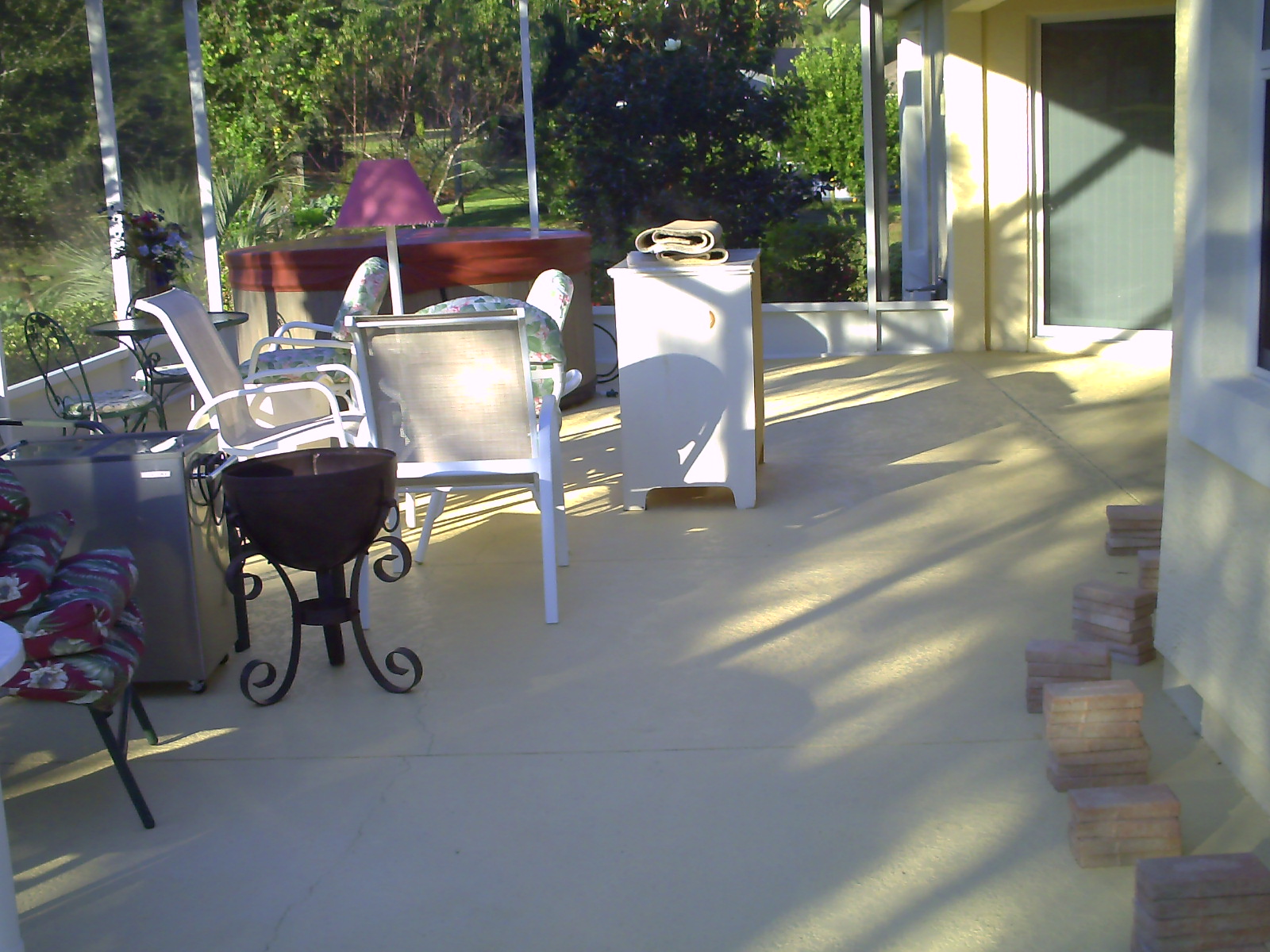 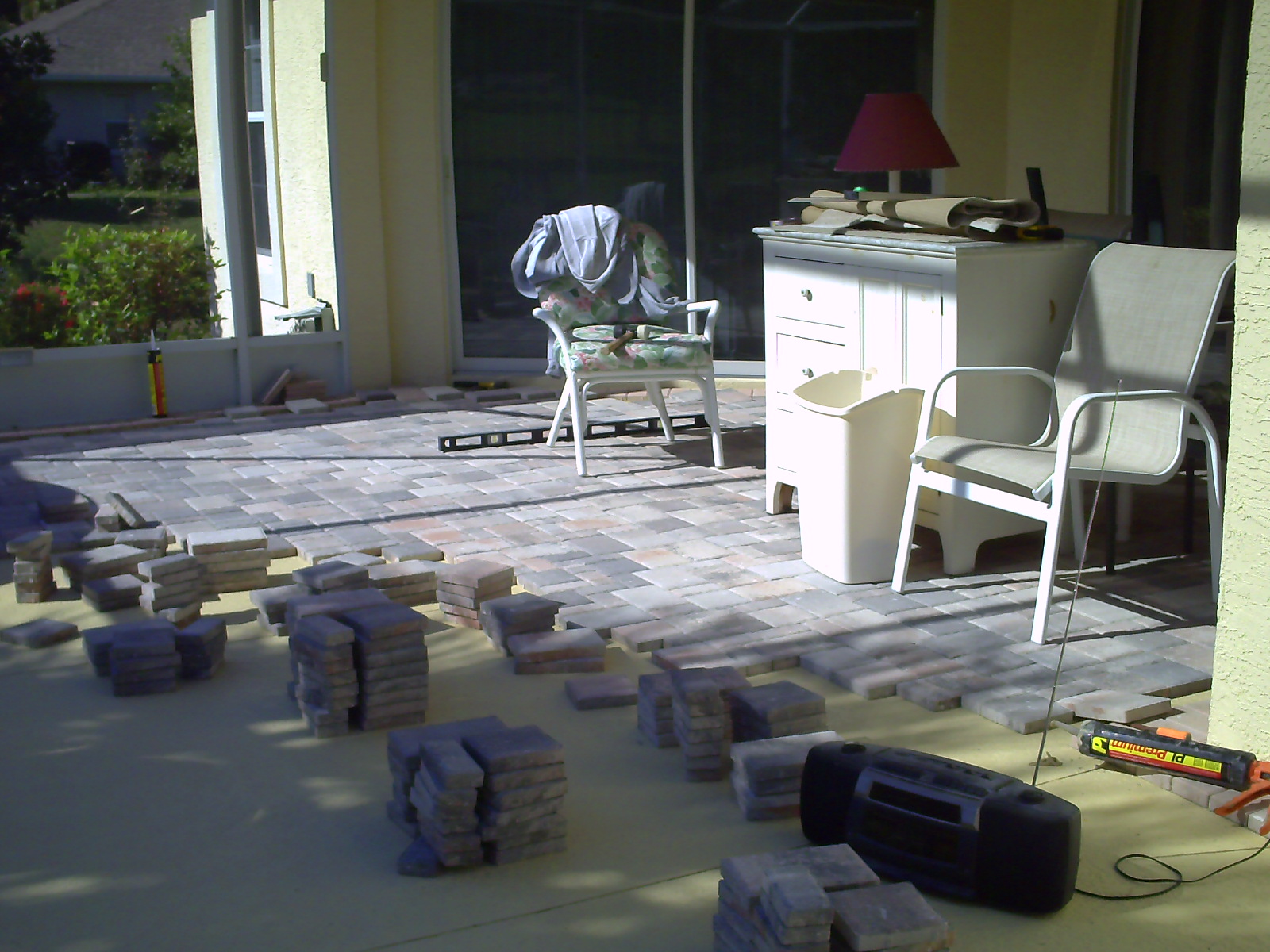 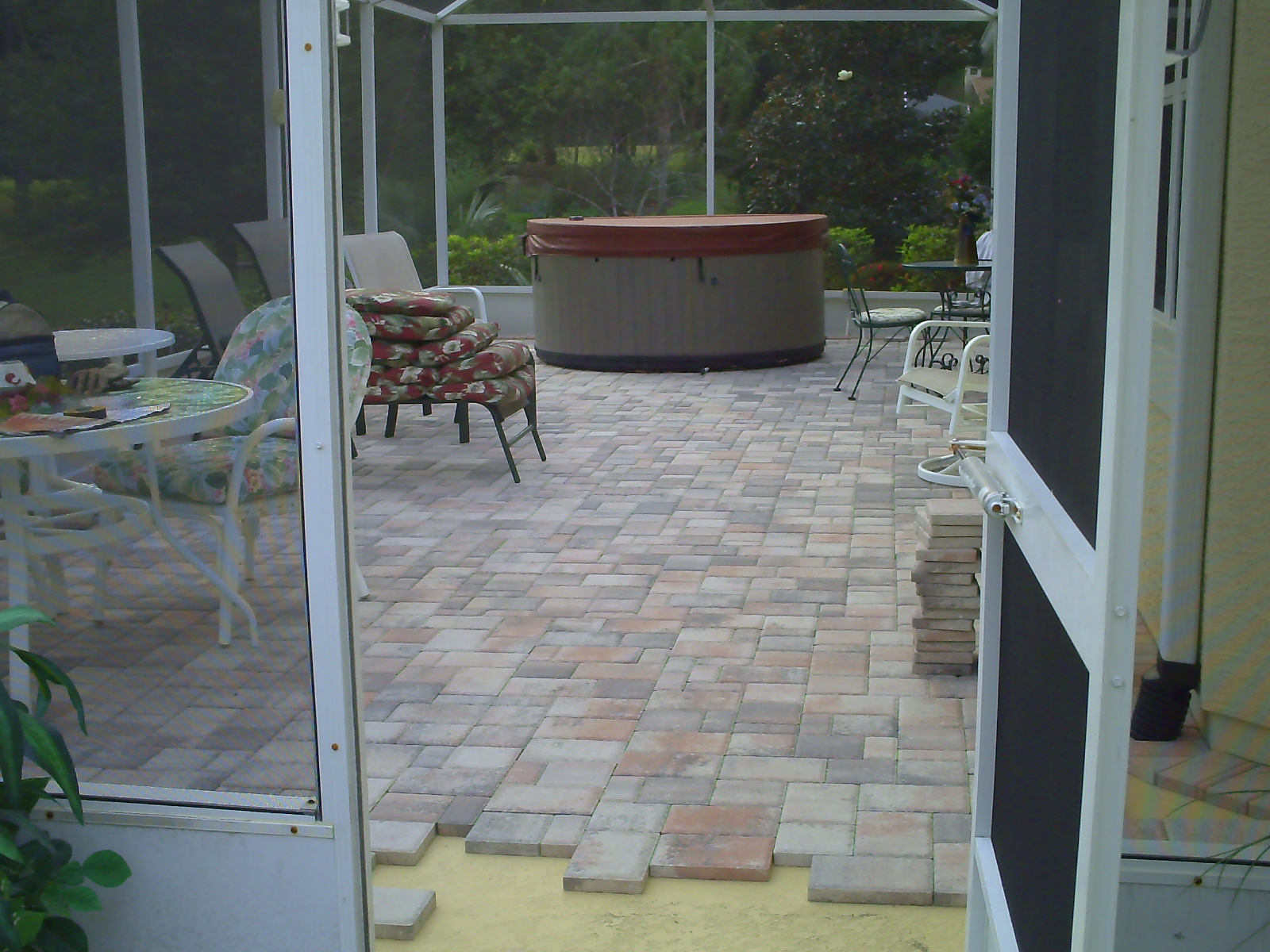 I guess Gordon has been hanging around Jim Boyle too long!
When I got to the job I asked where Gordon was, and yep, you got it. He was out playing golf! So I go over to Jim's house to pick out his driveway colors since we are starting that in a few days, and naturally Jim was on the course too!

Had a good day on the job. Got the Lanai almost finished now. Just have to grout in around the patio doors tomorrow, and cut down the screen door to finish underneath the door. From there we are going to rebuild/rework a sidewalk that was improperly laid by another company a few years ago.
OK, here are some progress pictures from today!

It's looks to me like Joan is contemplating whether or not she's got enough muscle to send Gordon into that Hot Tub head first! Go for it Joan! 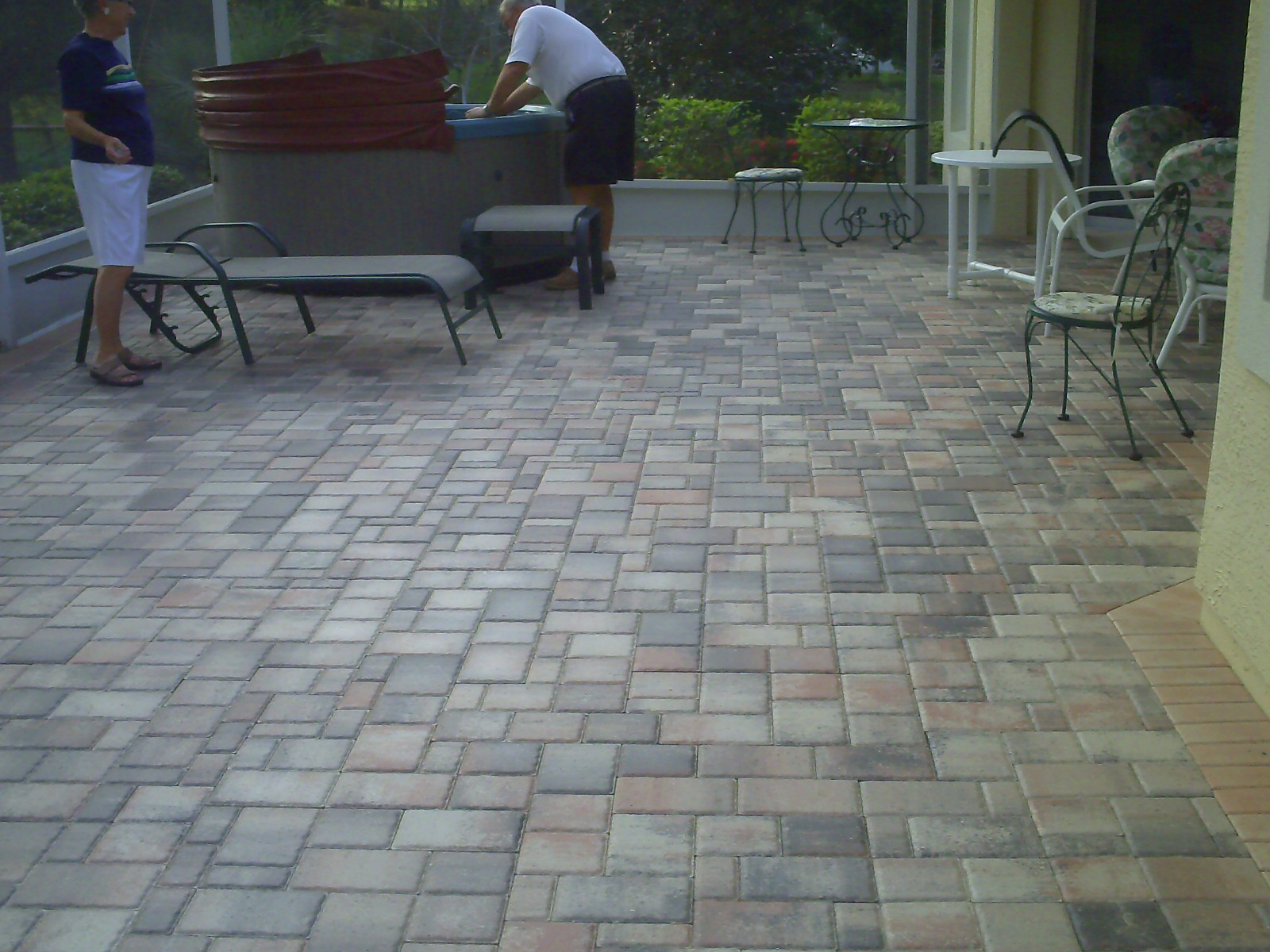 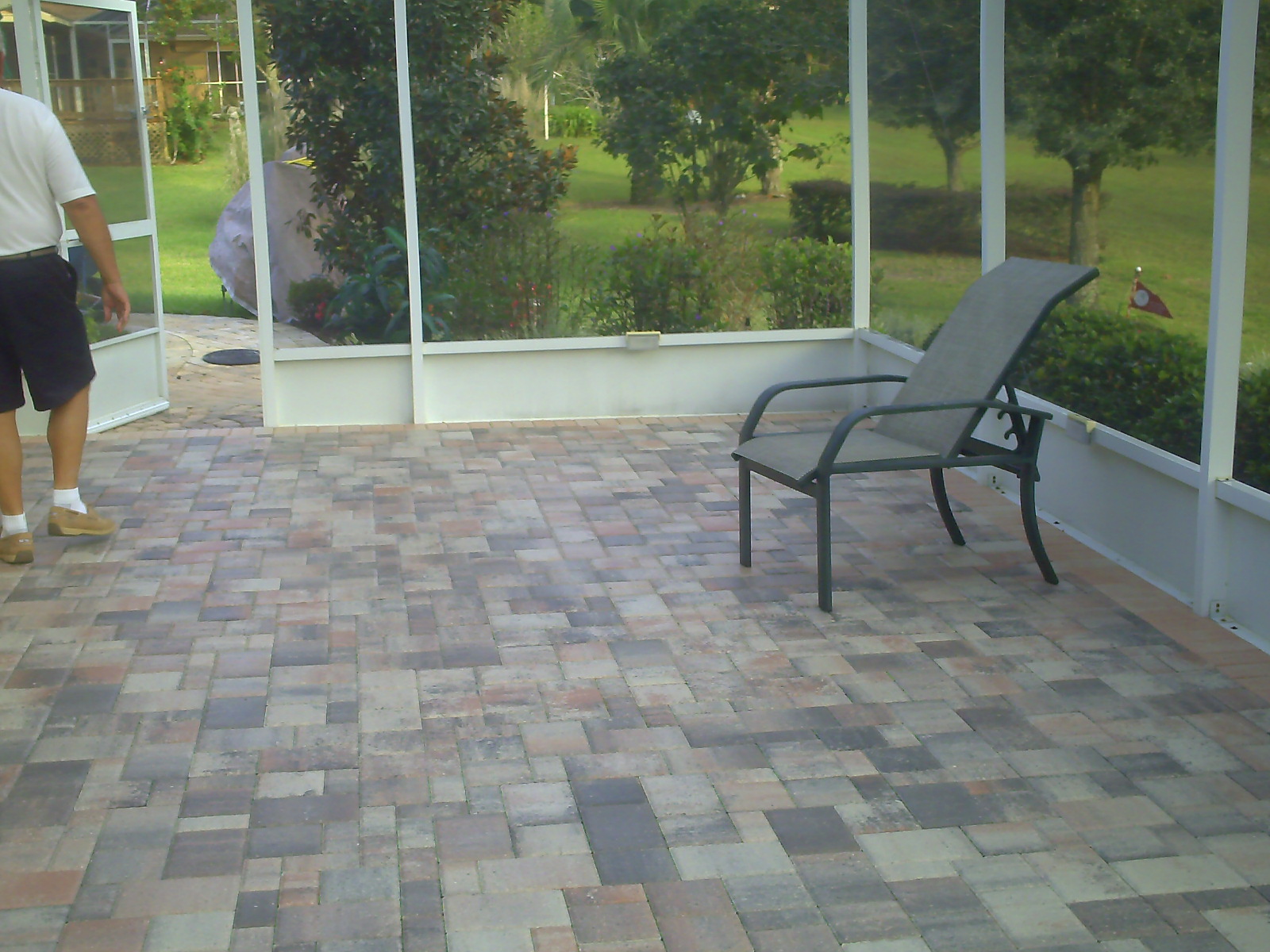 Here is a picture of Shadow, the family dog!
Looks a lot Russell when he doesn't shave!
Well, other than the dog has hair on it's head! 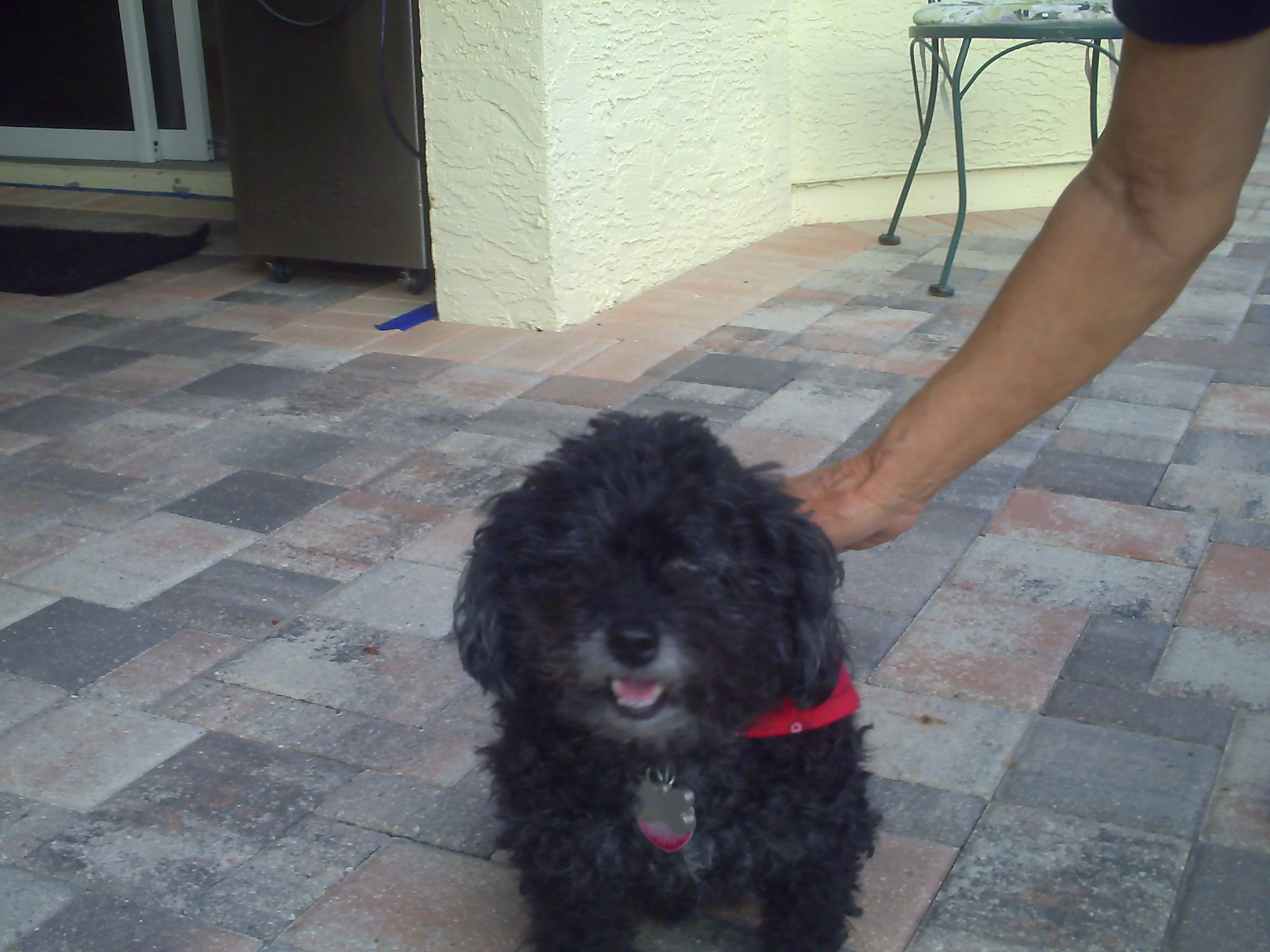 See what I mean? Here's a picture of Russ below!

I know what to get Russell for Christmas now!
Do they make RAZORS with "8" blades in them yet?

Oops! My bad!
This is just Shadow inspecting the paver job for defects!
Keep up the good work Shadow!

Heaven knows someone has to keep an eye on Russ, John and Dennis when I'm not around! 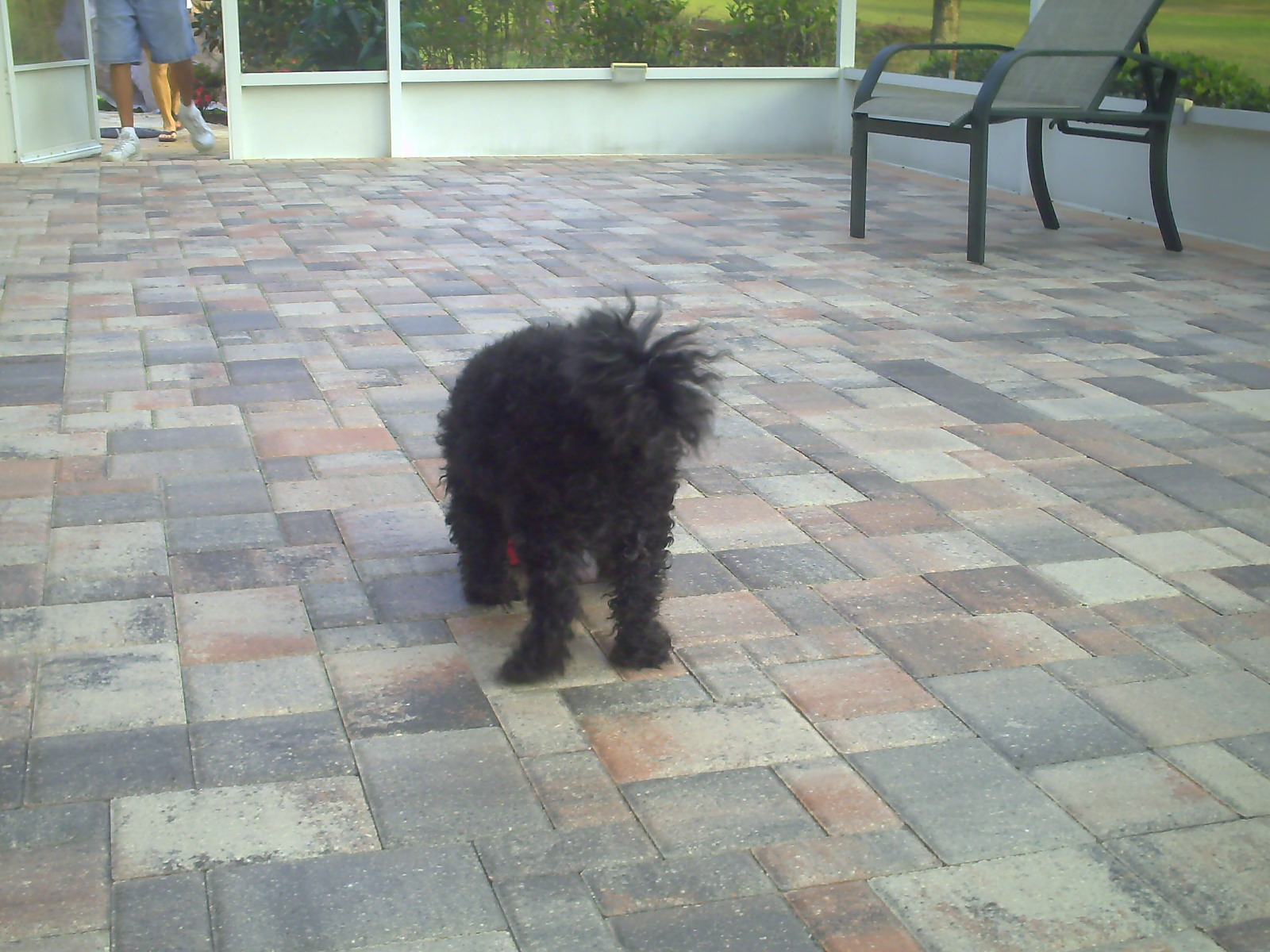 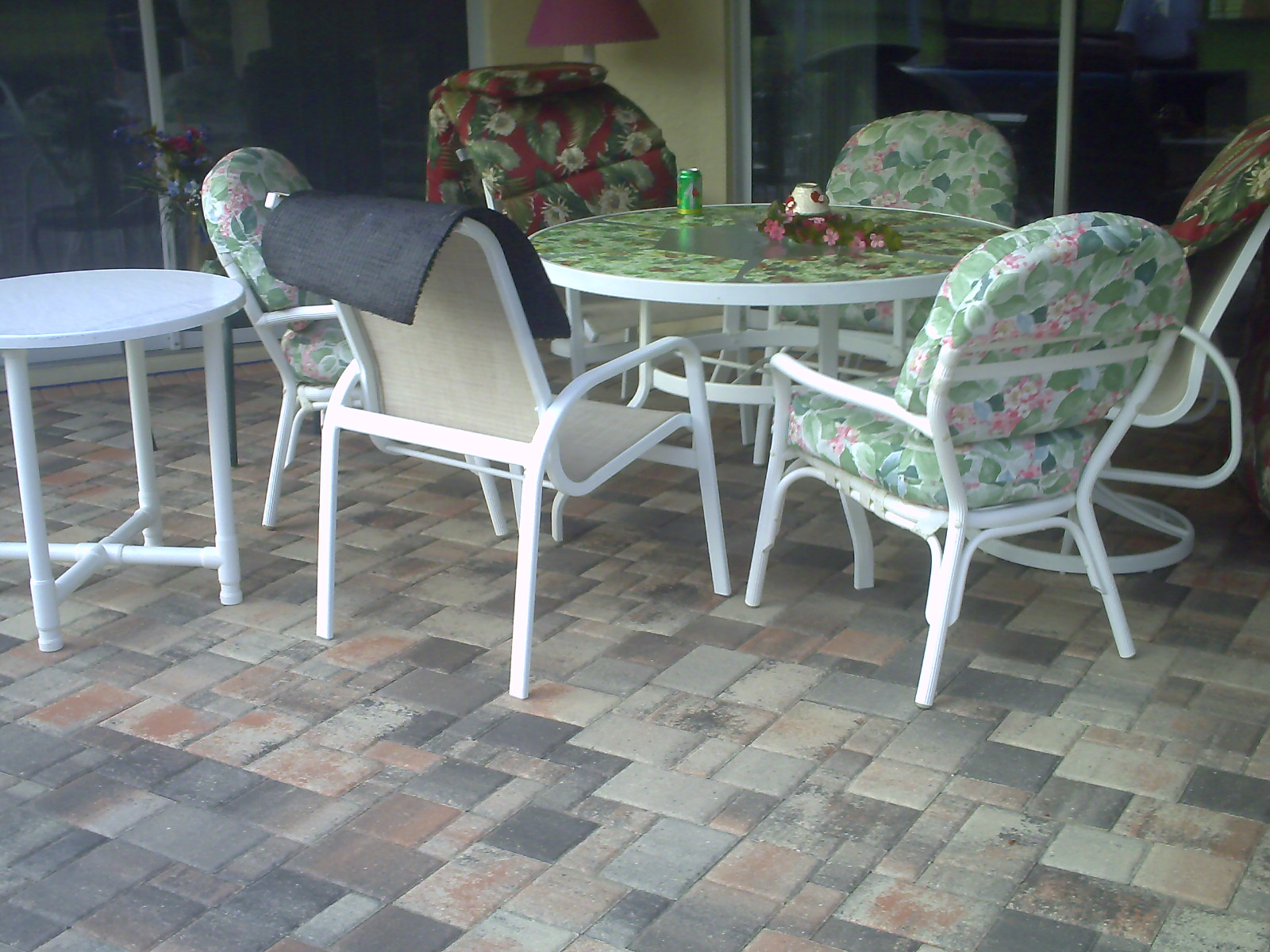 Sidewalk Repairs
I'm gonna be a nice guy and not mention the company that built this sidewalk, but they are located on Grover Cleveland Road!

I will say this! They should be put out of the PAVER business because this kind of shoddy work hurts all the good guys out there that care and do quality work, not to even mention what a rip off it is for the good people that trust these people to work on their homes.
Companies like this really MAKE ME MAD!

Here's what we had to start with! Look at those massive gaps in the Soldier course. Not only that, but they never cemented the soldiers in so every time the lawn guy mows the grass they pop out!
Poor Gordon was constantly out there kicking them back in, and slapping a little cement around here and there trying to get this thing to hold together!!!

This is exactly why you folks need to hire P.H.D. to do your work.
We will do WHATEVER it takes to get the job 100% right and then some!
I felt so bad for Gordon and Joan when I saw what happened, I decided to fix it for them!
Sorry, could resist a little self promotion! 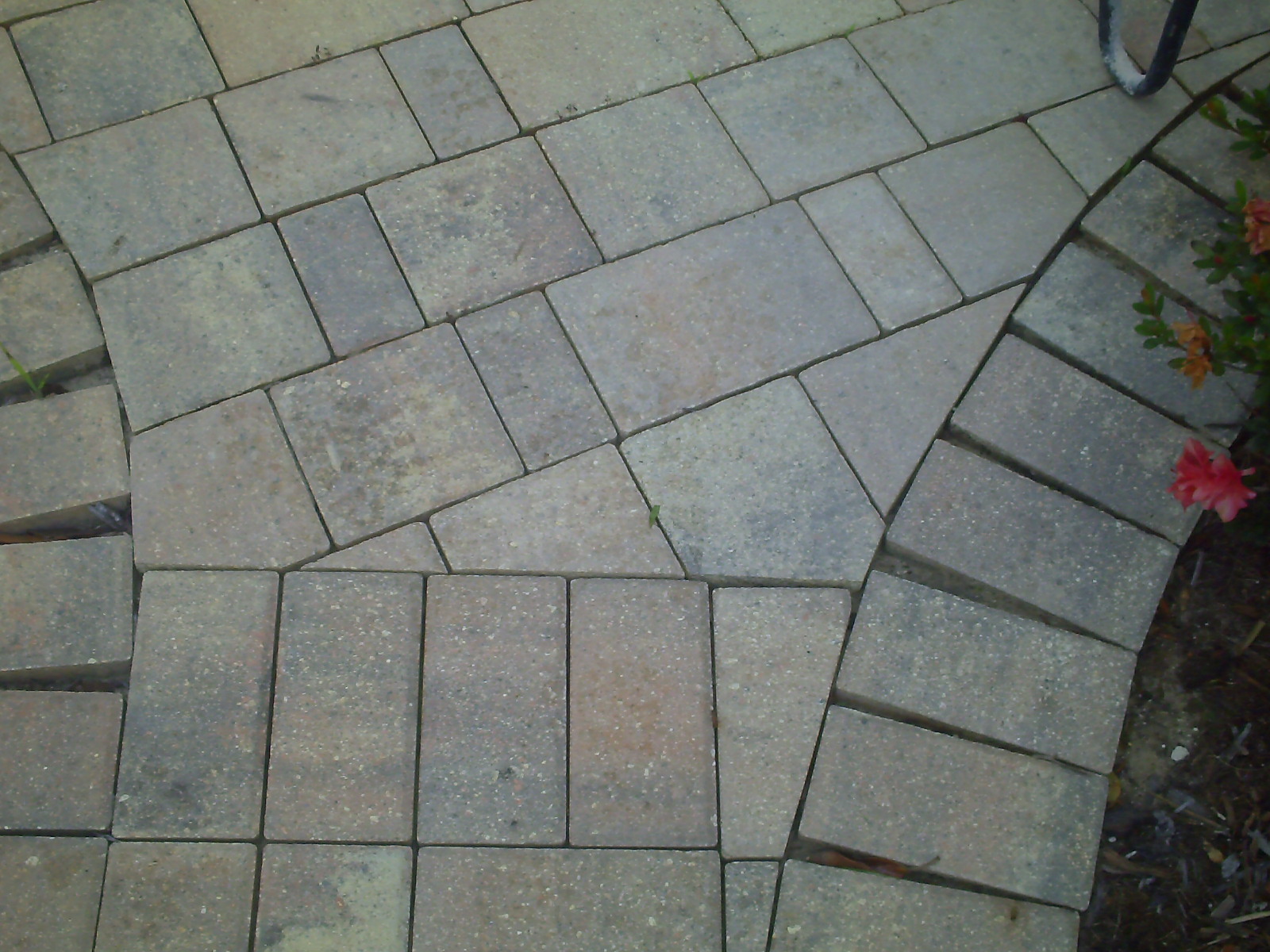 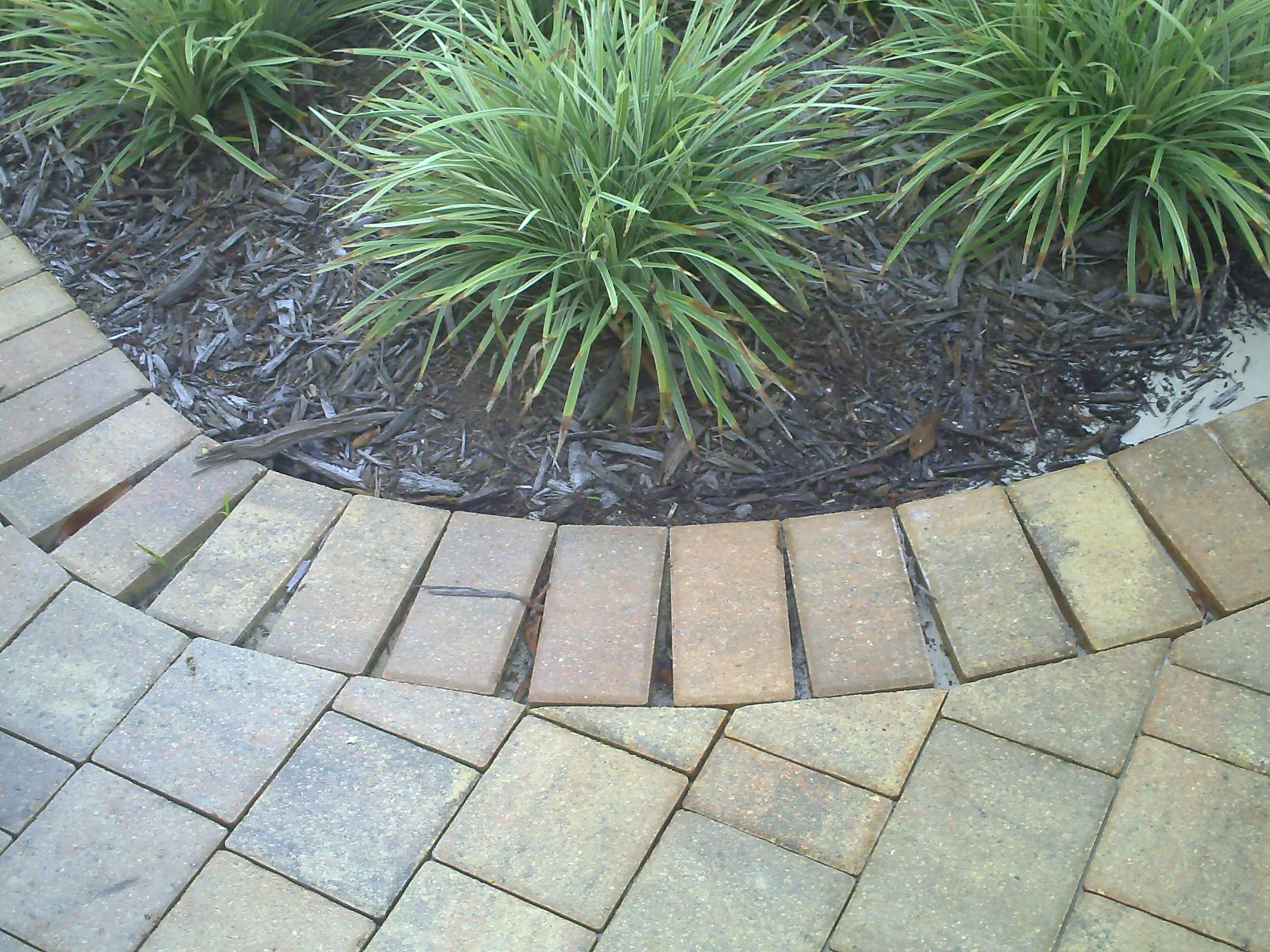 Notice below how we cut all the soldiers in properly thru out the entire sidewalk. 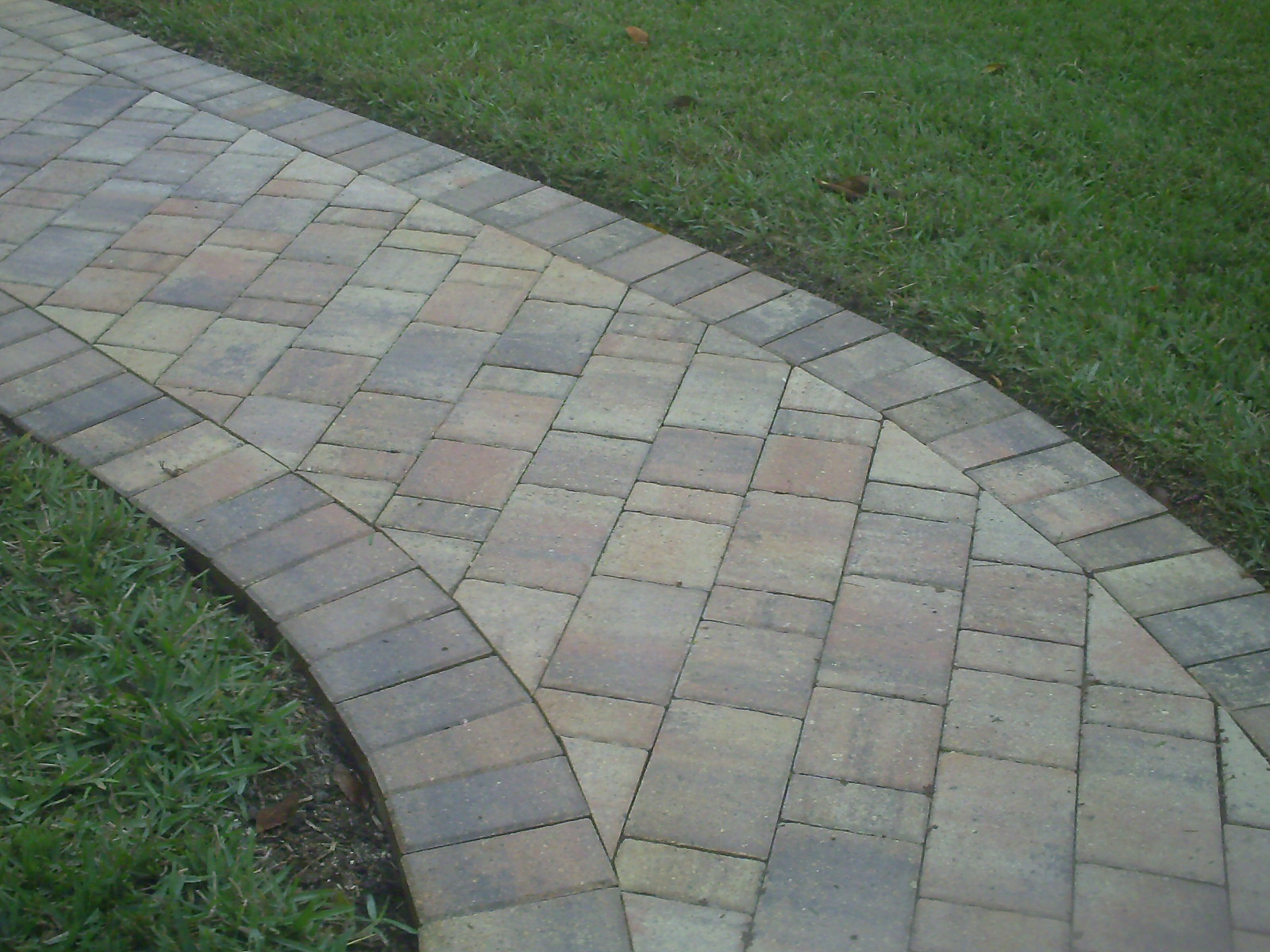 Same nasty gaps on the entry landings too! 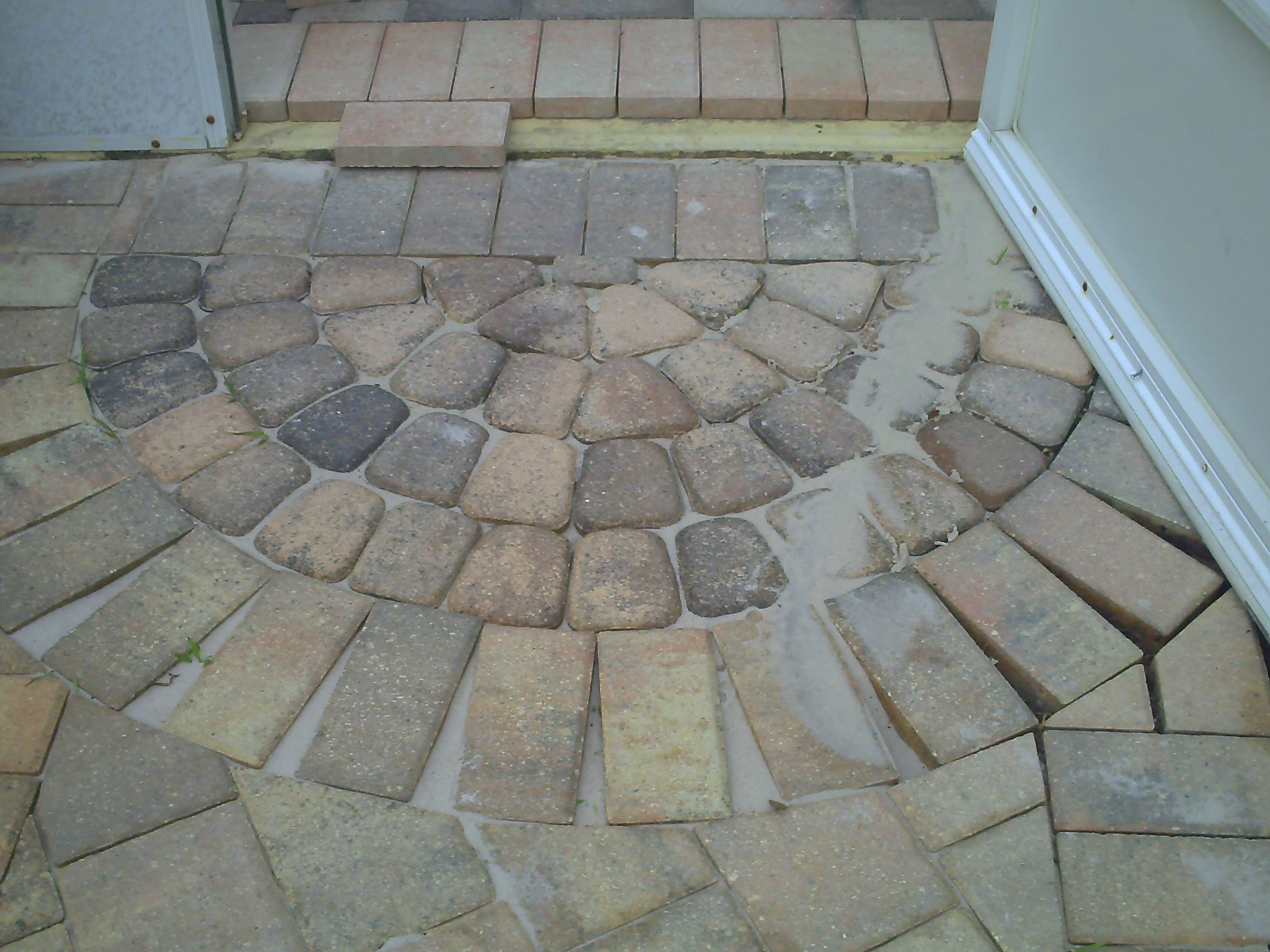 After we fixed it! 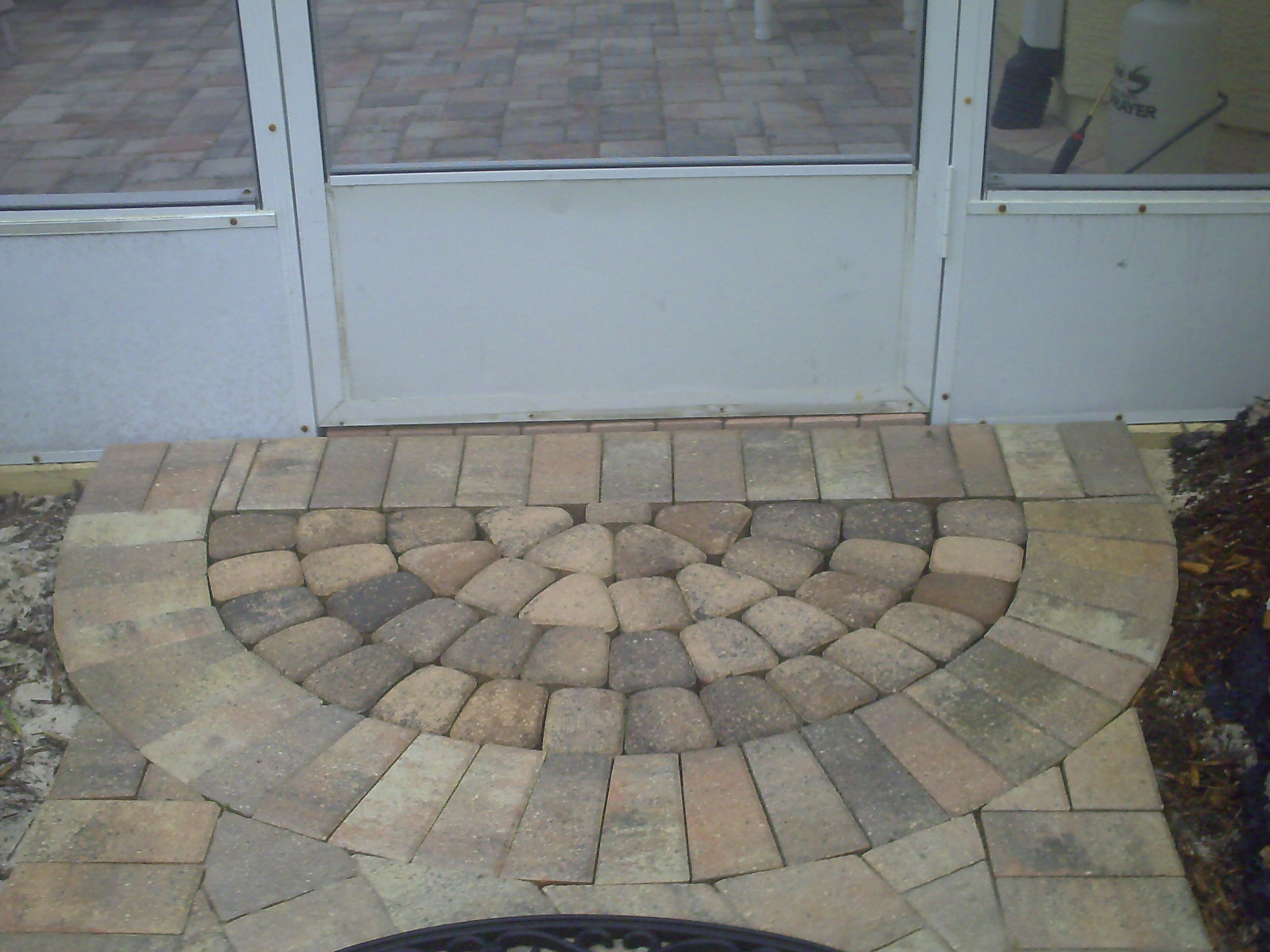 Same gaps out by the driveway landing, and as you can see, it's blowing apart because it was never installed properly!!
It's looking great now, and Joan is very happy!
Gordon is too!

I don't think so much because of the work,
BUT BECAUSE JOAN is HAPPY!

We are still in progress, but are trying to get out of the way since Joan and Gordon's kids are coming in tomorrow around noon,......to paint the house as a Christmas Present!

Man! Now those are some GREAT KIDS, HUH??!!!!!!!!!!!
Clearly,
Joan was the responsible parent in raising these children!

Just kidding Gordon!
It's been a blast hanging out there with you guys for a few days! We'd stay longer if you hadn't spent my DRIVEWAY PAVER Money on a new EXPEDITION!

Seriously, Hope you guys a great time with your kids!

Russ  and John finished up our pet project on the sidewalk!

Here are the final results of rebuilding the sidewalk, and the entry landings!
Look pretty good now!

We used this new stuff they have at Flagstone to use on cobblestones to finish them off and fill up the gaps.
This stuff is pretty slick!  I've been dying to try some of it so a big thanks to Gordon and Joan for letting us use them a guinea pigs for this! It's kind of like grout, but you just sweep it the cracks and water in down a little, and it hardens like concrete!! Here's how it turns out!

And After we cut the bricks in and used this magic dust stuff to finish between the cobblestones! 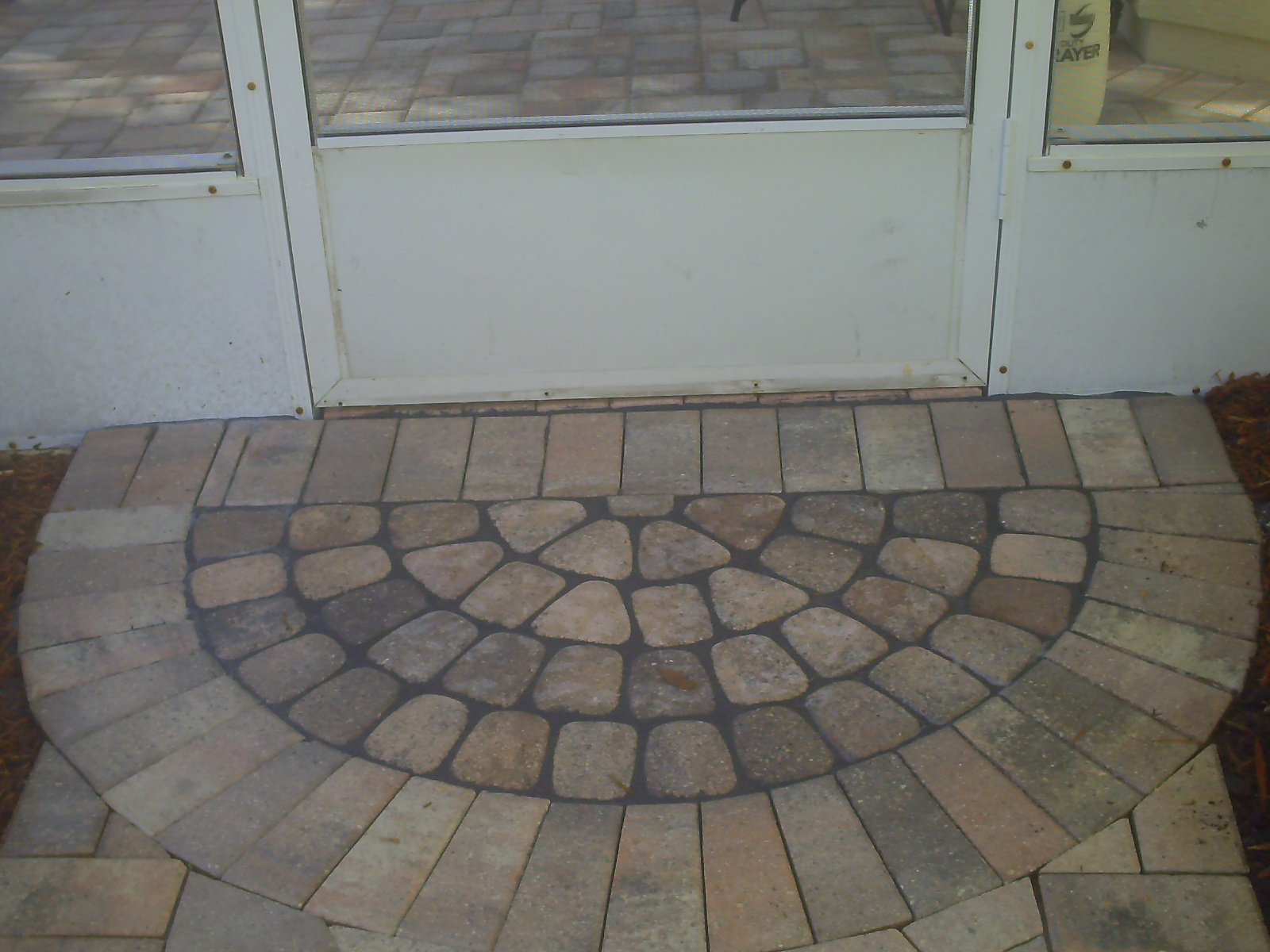 After we re-worked it and cut in all the bricks!

We also dug out the sides and cemented the outer soldiers in properly on both sides all the way down the sidewalk, so it should all hold together fine from here on out! 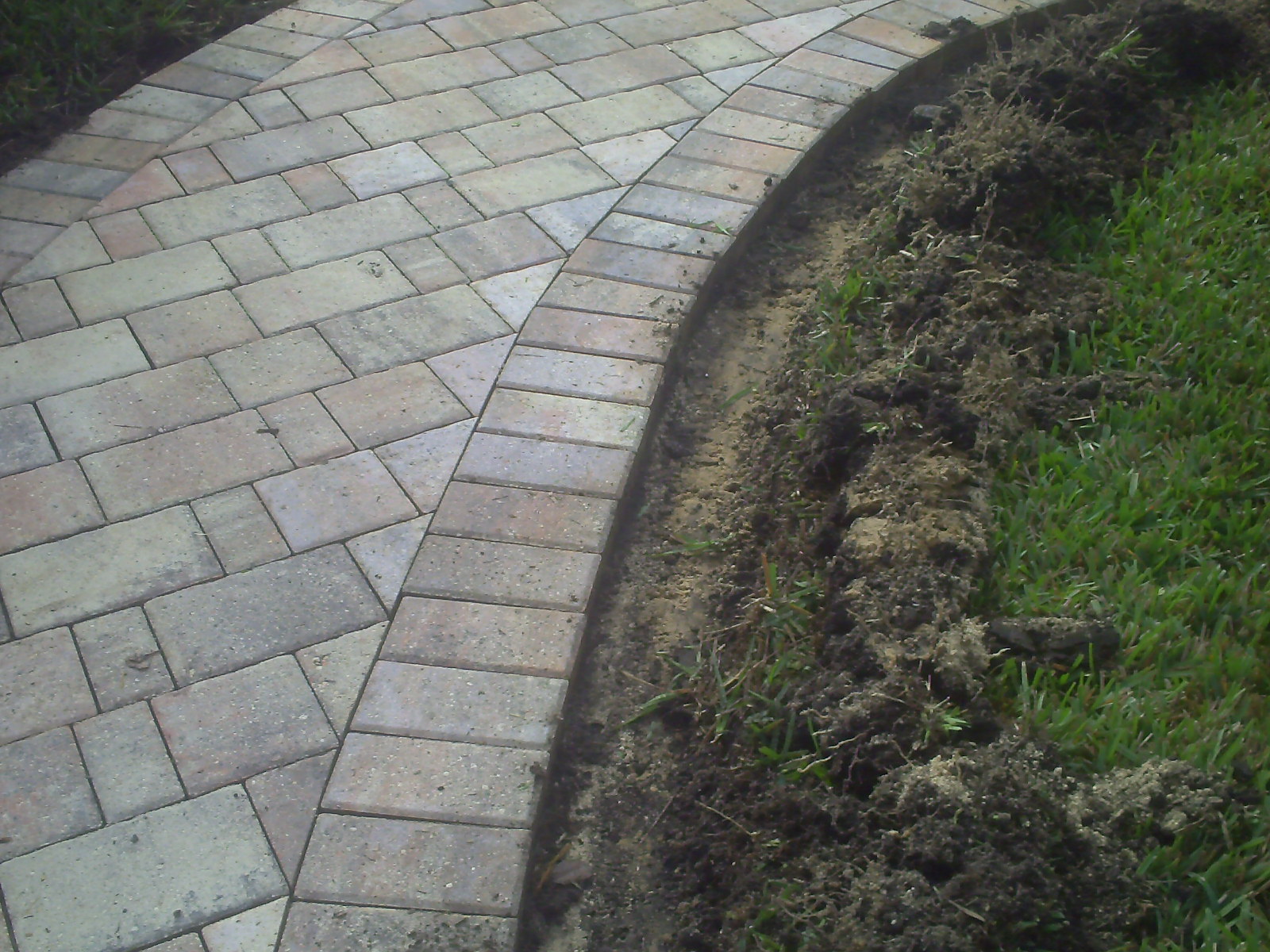 Here's a nice final shot from driveway looking down the sidewalk! 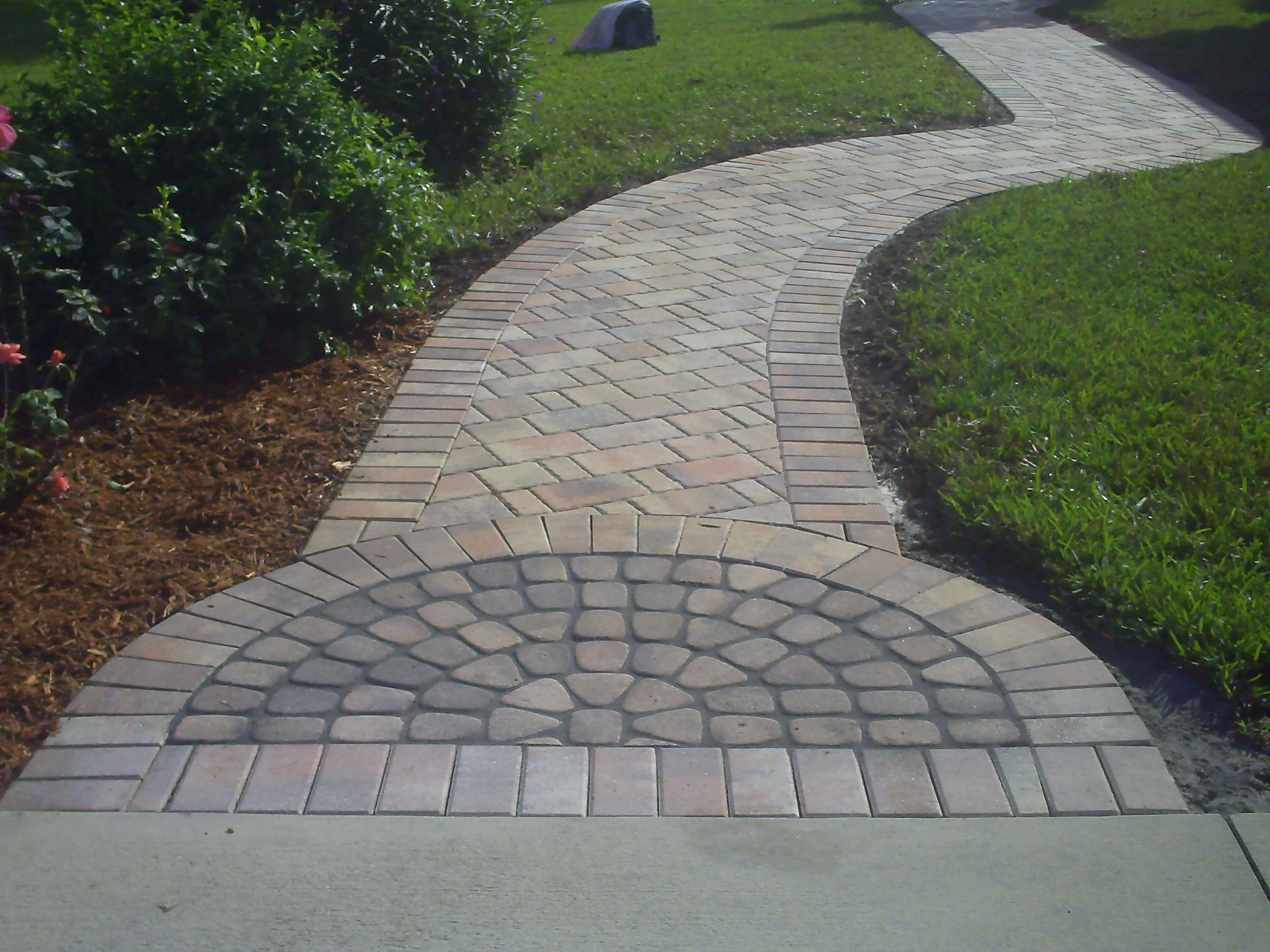 Once again, Gordon and Joan,.... thanks for trusting P.H.D. to work for you! We appreciate it, and enjoyed every minute we had with you folks! We'll be back over at Jim and Lynn's mid week, next week, so drop by and say hi!

Also, Joan wanted to send out a special Season's Greetings Card from Elin and Tiger Woods! 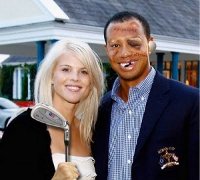 **Gordon, (just a suggestion}, but you might want to learn how to sleep with one eye open!